The Ten Steps To Walkable Cities 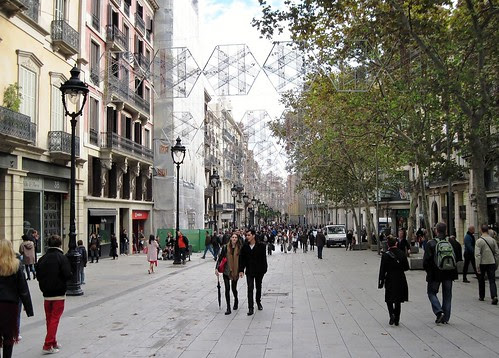 In Jeff Speck’s excellent new book, Walkable City, he suggests that there are ten keys to creating walkability.  Most of them also have something to do with redressing the deleterious effects caused by our allowing cars to dominate urban spaces for decades.  I don’t necessarily agree with every detail, and my own list might differ in some ways that reflect my own experience and values.  But it’s a heck of a good menu to get city leaders and thinkers started in making their communities more hospitable to walkers.
(I can’t say that Jeff and I know each other well, but we’re friends, and I like him a lot.  I’m listed in the acknowledgments, and one of my articles is cited in the narrative.  I previously reviewed The Smart Growth Manual, which Jeff co-authored with Andres Duany and Mike Lydon.)
Here are the author’s ten steps of walkability, with a memorable line from his description of each:
I mentioned above that there really isn’t as much about design in this very good book as one would expect from an author whose business is design.  In that sense, it reminds me of my good friend David Dixon, with whom I have done more co-presentations at various conferences than I can count.  David is an accomplished architect and planner; I am a lawyer.  Yet, almost inevitably, in our presentations I talk about design that I believe is good for the environment, and David talks about assembling the political will to get it done.
Walkable City is like David’s presentations.  It’s really a political text about why he believes we need to do these things, the objectives we should strive for (rather than the design solutions), and the obstacles that stand in the way, which he debunks one by one.  There is not a single visual image in the book, and really only a handful of verbal descriptions of successful walkable places.  This book is intended to motivate more than to illustrate.
Walking versus driving
The book’s opening chapter, before Jeff gets into the ten steps, is devoted to the rapidly increasing demand for walkable places and to an indictment of our car-oriented cities, which “have effectively become no-walking zones.” A “public realm that is unsafe, uncomfortable, and just plain boring” will not work for creative young people, he says, because they value a pedestrian culture that, among other things, creates opportunities for chance encounters that turn into friendships.  Indeed, as others (including myself) have pointed out, the entry of the millennial generation into the housing market at the same time that baby boomers are retiring is dramatically strengthening the market for walkable places. 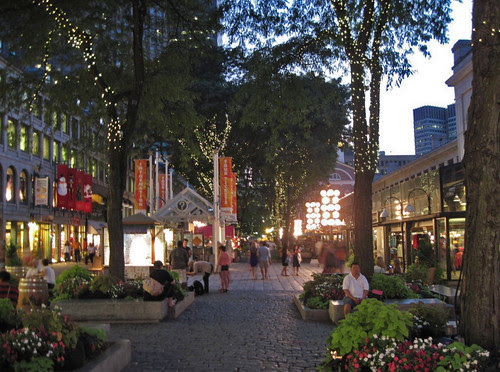 To become competitive in the new marketplace for the best and brightest, cities must respond:

Vancouver and Portland, Jeff argues, are among the places that are doing just that.
There’s a subtext to the book that I am not entirely comfortable with but that comes through strongly:  if we just stop making driving so convenient, easy and inexpensive, people will do less of it and walk more.  Put another way, making driving less convenient, more difficult, and more expensive will be good for walkers and for cities.  Sure, there are more politically skillful ways of phrasing it, but I think it’s undeniable that there is a sort of ideology and, in some circles, even hostility forming around this belief (“Cars suck” was the way one of my Facebook friends put it. “Has a place ever been made better by making it easier to drive to?” chimes another, rhetorically.)  There are losers as well as winners in this approach to walkability.
Saying I’m not entirely comfortable, by the way, does not mean that I entirely disagree.  It’s all about finding the right balance and the answers, for me at least, aren’t always clear.
Parks and greenery
I do disagree with some of the suggestions in the book about greenery and parks, where I think Jeff is too dismissive.  In a passage headlined “Boring Nature,” he concedes that green spaces are "necessary" before adding “but they are also dull.”  “Verdant landscapes do not entertain.” 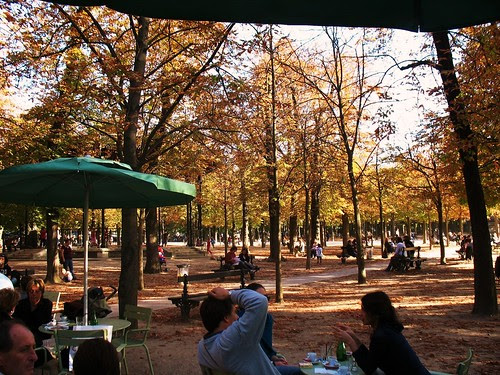 To suggest that parks discourage walking is to ignore the experience of the Jardin du Luxembourg in Paris, Russell Square in London, and St. Stephen’s Green in Dublin, to name three of my very favorite urban places.  I don’t even want to think about Washington without Rock Creek Park, and I’m sure a lot of San Franciscans and New Yorkers feel the same way about Golden Gate and Central Parks.  In downtown DC, I will go out of my way to walk through one of our green squares while running an errand.  I believe we need respite and calm in cities as much as we need liveliness.
Do some parks do a poor job of it?  Oh, yeah.  Just read my essay on DC’s National Mall for my thoughts about the ones that get it wrong.
Beyond parks per se, I disagree strongly with Jeff’s dislike of green infrastructure to reduce stormwater pollution:

“Current impulses to make our downtowns more sustainable by filling them with pervious surfaces, prairie grass, and the latest craze—“rain gardens”— threaten to erase one of the key characteristics that distinguishes cities from the suburbs that remain their principal competition.”

The way I see it, what these things “erase” is mostly mundane or ugly concrete.  Moreover, they accomplish some important things besides just looking pretty.  First, these techniques help prevent water pollution and combined sewer overflows, something Jeff rightly expresses concern about in his chapter on trees.  Second, even the book he co-authored, The Smart Growth Manual, advocates permeable pavement to control stormwater, as do a growing number of urban scientists and thinkers. 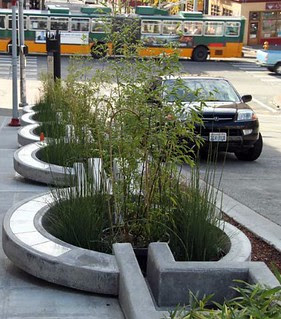 Third, because these things can be done very attractively and in ways highly compatible with city fabric, they can raise property values, even if you’re not the kind of person who values nature intrinsically.
I actually doubt we have much real disagreement on these things; over an appropriate beverage Jeff and I would probably come to a great deal of agreement on which kinds of green belong where.  I definitely agree with the starting premise that cities should be cities and rural land and wilderness should be rural land and wilderness.  That’s one of the reasons I abhor the “new towns” that many otherwise progressive architects and planners are all-too-willing to plop down in the countryside when a big developer comes calling.
For me, the test of any city greening is whether or not it supports (rather than displaces) urban density and function.  (I disagree with those who espouse the oxymoronic “agrarian urbanism,” or want to demolish buildings in disinvested cities to replace them with 50-acre farms.  Smaller “farms” and gardens, though, can be great because they can support city life.)  One of the points I would try to make over that beverage would be that different approaches work in different cities and cultures.  Rightly sized and designed green infrastructure and parks are among the things that make cities possible in the 21st century.
I was a little surprised not to see more in Walkable City about street connectivity, which Ewing and Cervero’s exhaustive synthesis of transportation research found was the single most important determinant (among those analyzed) of how much walking takes place in a neighborhood.  Connectivity shortens distances, making purposeful walking more attractive.  Jeff does espouse small city blocks, which gets close to connectivity but isn’t quite the same thing.
Congestion can be good
Before closing, here’s why I think congestion pricing can be complicated:  many American cities need more, not less, congestion.  Suburban sprawl and the flight of people and investment out of downtowns in the late 20th century made a mess of things.  Some central cities, like Washington, have started to grow again, thank goodness. 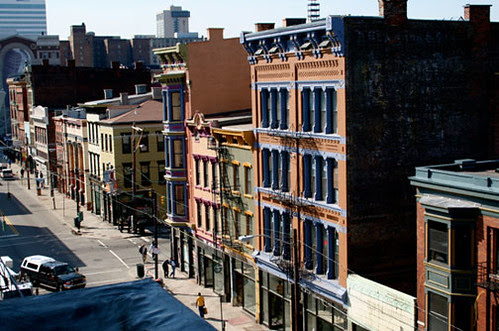 But even DC has a population 23 percent below the 1950 level.  Others, like St. Louis, Pittsburgh and Buffalo, remain far below their once-thriving levels and have yet to rebound.
The most commonly discussed form of congestion pricing is called “cordon pricing,” under which drivers are charged for entering downtown at certain times of day.  It works in London, and might even work in New York, cities whose downtowns are so strong that they can withstand being taxed in a way that their suburbs are not.  But the last thing that still-recovering downtowns need is to give people and businesses another reason not to go there.  Besides, here in DC and I suspect in many other places, the suburban roadways are far more congested than those in the city.  This needs some more thought and analysis before those of us who care about cities seize on it as a solution for everywhere.
I could say even more
There is so much more in the book that I wish I had more time and space to relate.  (I'd love to quibble about grammar and syntax, too, preferably over a second round of that beverage I mentioned earlier.)  My sense is that Jeff, like I have on occasion, pretty much poured at least a little bit about everything he knew on the subject into this one volume, making it rich with interesting detail.
The bottom line is that Walkable City is very good indeed, a worthy addition to the canon of urban thinking.  The subject matter is critical, and Jeff is a very good and entertaining writer who keeps his reader engaged.  For those of us who think about cities for a living, this well-annotated treatise can help organize our thoughts and point us to helpful research and opinion.  For those outside the field but in a position to do something, it summarizes some of the best thinking on what to do to tame the car culture and make cities more walkable.  For those who are merely interested or who may be curious, it will change the way you see cities.  You can find Walkable City at your favorite bookstore or access it from Jeff’s website, which is pretty interesting in itself. 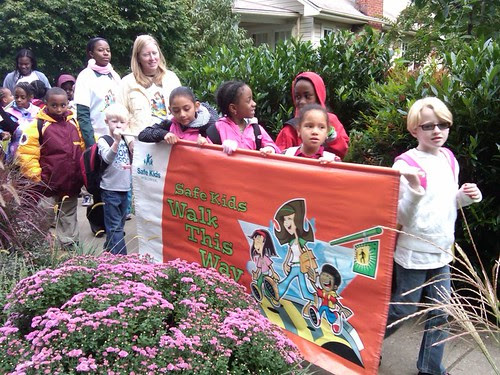