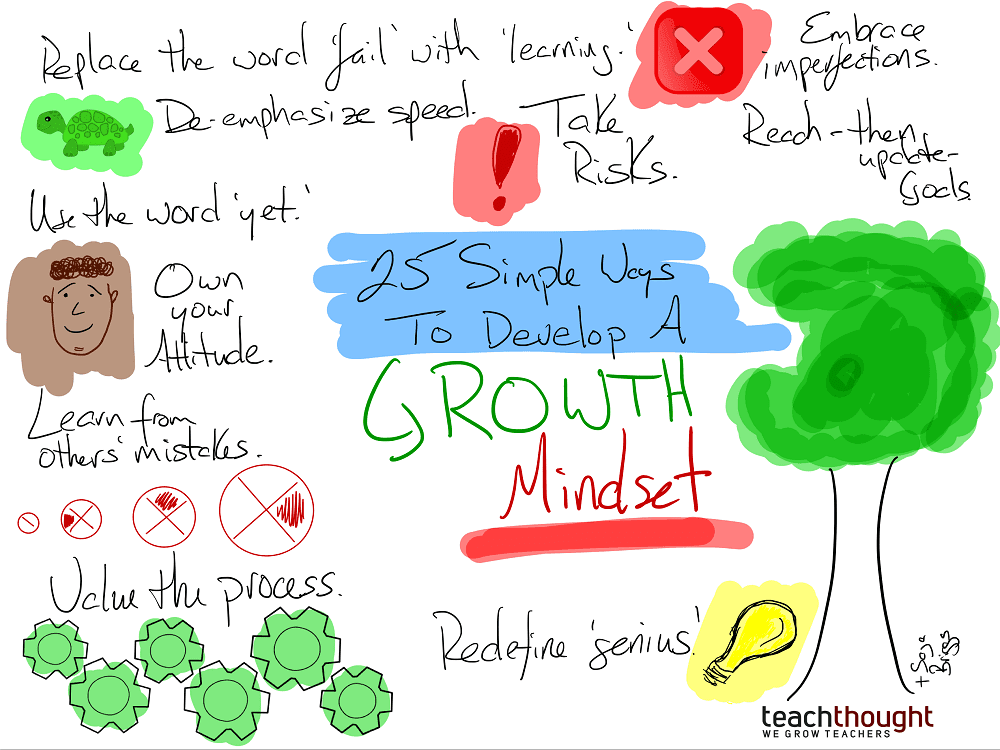 What if your true learning potential was unknown, even unknowable, at best?

What if it were impossible to foresee what you could accomplish with a few years of passion, toil, and training? According to Stanford psychologist Carol Dweck, this isn’t some hypothetical situation, dependent on any manner of factors from genes to environment. It’s a mindset. And it’s one you can cultivate at any point in life.

A “growth mindset,” as Dweck calls it, is pretty much exactly what it sounds like: a tendency to believe that you can grow. In her book Mindset: The New Psychology of Success (affiliate), she explains that while a “fixed mindset” assumes that our character, intelligence, and creative ability are static givens which we can’t change in any meaningful way, a growth mindset thrives on challenge and sees failure “not as evidence of unintelligence but as a heartening springboard for growth and for stretching our existing abilities.”

The consequences of believing that intelligence and personality can be developed rather than being immutably engrained traits, Dweck found in her two decades of research with both children and adults, are remarkable. She writes:

“Believing that your qualities are carved in stone creates an urgency to prove yourself over and over. If you have only a certain amount of intelligence, a certain personality, and a certain moral character, well then you’d better prove that you have a healthy dose of them. It simply wouldn’t do to look or feel deficient in these most basic characteristics.”

The fixed mindset can negatively impact all aspects of your life, Dweck says.

“I’ve seen so many people with this one consuming goal of proving themselves in [a learning setting], in their careers, and in their relationships. Every situation calls for a confirmation of their intelligence, personality, or character. Every situation is evaluated: Will I succeed or fail? Will I look smart or dumb? Will I be accepted or rejected? Will I feel like a winner or a loser?”

But when you start viewing things as mutable, the situation gives way to the bigger picture.
“This growth mindset is based on the belief that your basic qualities are things you can cultivate through your efforts. Although people may differ in every which way in their initial talents and aptitudes, interests, or temperaments, everyone can change and grow through application and experience.”

This is important because it can actually change what you strive for and what you see as success. By changing the definition, significance, and impact of failure, you change the deepest meaning of effort. In this mindset, the hand you’re dealt is just the starting point for development.

So how does this apply to learning and what can we do to help instill this attitude in our students?

How Can A Growth Mindset Help You Learn?

In a study of hundreds of students, mostly adolescents, Dweck and her colleagues found something startling: students with a fixed mindset will reject learning if it means not failing.

Dweck writes: “The ability praise pushed students right into the fixed mindset, and they showed all the signs of it, too: When we gave them a choice, they rejected a challenging new task that they could learn from. They didn’t want to do anything that could expose their flaws and call into question their talent.”

On the other hand, when students were praised for effort, 90 percent of them wanted the challenging new task that they could learn from.

Even more alarming, when Dweck and her colleagues gave the students a subsequent set of harder problems, on which the students didn’t do so well, the ability-praised kids thought they weren’t so smart or gifted after all.

“If success had meant they were intelligent, then less-than-success meant they were deficient.”
For the effort-praised kids, the difficulty was simply an indication that they had to put in more effort, not a sign of failure or a reflection of their poor intellect.

The most unsettling finding came after the IQ questions were completed, when the researchers asked the kids to write private letters to their peers relaying the experience. Students were asked to disclose their scores as well. One byproduct of the fixed mindset turned out to be dishonesty: Forty percent of the ability-praised kids lied about their scores, inflating them to look more successful.

“In the fixed mindset, imperfections are shameful, especially if you’re talented, so they lied them away. What’s so alarming is that we took ordinary children and made them into liars, simply by telling them they were smart.”

Perhaps Dweck’s most telling research explores how these mindsets are formed, and how early on in life. In one seminal study, Dweck and her colleagues offered four-year-olds a choice: They could either redo an easy jigsaw puzzle or try a harder one. Children who exhibited a fixed mentality stayed on the safe side, choosing the easier puzzles that would affirm their existing ability. Children with a growth mentality thought it an odd choice to begin with, perplexed why anyone would want to do the same puzzle over and over if they weren’t learning anything new. In other words, the fixed-mindset kids wanted to make sure they succeeded in order to seem smart, whereas the growth-mindset ones wanted to stretch themselves, for their definition of success was about becoming smarter.

Things got even more interesting when Dweck brought people into the Columbia University’s brain-wave lab to study how their brains behaved as they answered difficult questions and received feedback. What she found was that those with a fixed mindset were only interested in hearing feedback that reflected directly on their present ability, but tuned out information that could help them learn and improve.

They even showed no interest in hearing the right answer when they had gotten a question wrong, because they had already filed it away in the failure category. Those with a growth mindset, on the other hand, were keenly attentive to information that could help them expand their existing knowledge and skill, regardless of whether they’d gotten the question right or wrong. In other words, their priority was learning, not the binary trap of success and failure.

These findings are especially important to formal education and instruction, as they shed light on how we, as a culture, understand learning ability.

What’s so valuable about the latter world is that it’s marked by a passion for learning rather than a hunger for approval. People with a growth mindset have a voracious appetite for learning, constantly seeking out the kind of input that they can metabolize into learning and constructive action. And this is extremely significant news for students and teachers.

Could that concept be any more powerful and inspiring?

Hiding from your weaknesses means you’ll never overcome them.

Having a growth mindset means relishing opportunities for self-improvement.


3. Try different learning tactics.
There’s no one-size-fits-all model for learning. What works for one person may not work for you.

The brain isn’t fixed; the mind shouldn’t be either.


5. Replace the word “failing” with the word “learning.”

When you make a mistake or fall short of a goal, you haven’t failed; you’ve learned.

When you prioritize approval over learning, you sacrifice your own potential for growth.


7. Value the process over the end result.

Intelligent people enjoy the learning process, and don’t mind when it continues beyond an expected time frame.


8. Cultivate a sense of purpose.

Dweck’s research also showed that students with a growth mindset had a greater sense of purpose. Keep the big picture in mind.


9. Celebrate growth with others.

If you truly appreciate growth, you’ll want to share your progress with others.

Tell students when they’re doing something smart, not just being smart.

See also 6 Principles Of Genius Hour In The Classroom

You don’t have to used that hackneyed term, “constructive criticism,” but you do have to believe in the concept.

Stop assuming that “room for improvement” translates into failure.

Let students reflect on their learning at least once a day.

Hard work should always be rewarded before inherent skill.


17. Highlight the relationship between learning and “brain training.”

Students with that extra bit of determination will be more likely to seek approval from themselves rather than others.

“Naturally smart” sounds just about as believable as “spontaneous generation.” You won’t achieve the image if you’re not ready for the work.

Dweck says “not yet” has become one of her favorite phrases. Whenever you see students struggling with a task, just tell them they haven’t mastered it yet.


21. Learn from other people’s mistakes.

It’s not always wise to compare yourself to others, but it is important to realize that humans share the same weaknesses.


22. Make a new goal for every goal accomplished.

You’ll never be done learning. Just because your midterm exam is over doesn’t mean you should stop being interested in a subject. Growth-minded people know how to constantly create new goals to keep themselves stimulated.


23. Take risks in the company of others.

Stop trying to save face all the time and just let yourself goof up now and then. It will make it easier to take risks in the future.


24. Think realistically about time and effort.

It takes time to learn. Don’t expect to master every topic under the sun in one sitting.


25. Take ownership over your attitude.

Once you develop a growth mindset, own it. Acknowledge yourself as someone who possesses a growth mentality and be proud to let it guide you throughout your educational career.