The Trash Planet series highlights various countries around the world and how they handle their waste.

Germany leads the European nations in recycling, with around 70 percent of the waste the country generates successfully recovered and reused each year. To put that figure into perspective, consider this: In 2007, the U.S. was able to recover only about 33 percent of the waste generated that year.

To operate such a successful waste management system nationwide is certainly no small feat, but for the past several years the Germans have made it look easy. So how do they do it?

“Recycling is very important in Germany,” says Günseli Aksoy, a 24-year-old mechanical engineering student at the Braunschweig University of Technology. “The people here are very conscientious.”

Germany's recycling rate is one of the highest in the world - an respectable 70 percent. Photo: Faa.gov

And while the country’s conscientious waste management strategy requires cooperation from the government, the industry and the citizens, it starts at the very beginning of the waste creation process – with the product manufacturers.

By incorporating waste avoidance into industry, much of Germany’s waste management becomes “invisible,” as corporations are forced to re-think every aspect of manufacturing. Packaging, processes and disposal of items are all engineered with recycling and elimination of waste in mind.

In 1996, German lawmakers who were concerned about the country’s growing number of landfills passed the Closed Substance Cycle and Waste Management Act, which requires businesses to eliminate waste production by implementing one or more of the three management strategies.

Waste avoidance is first priority because it encourages companies to design their manufacturing processes and packaging with elimination of wastefulness in mind. Second, waste that can’t be avoided must be recycled or converted into energy. Lastly, waste that can’t be recovered must be disposed of in a way that is environmentally safe.

The concept in which private industries are responsible for eliminating waste – and for covering the costs – is described as the “polluter pays” principle. In other words, those who create the waste are responsible for cleaning up the mess. The U.S. has a “consumer pays” policy, in which waste management is funded by taxpaying citizens.

Germany’s three-point strategy doesn’t apply to just the country’s solid and packaging wastes, but also to liquid, gaseous, hazardous, radioactive and medical wastes. The efforts have been hugely successful; according to the German Federal Statistical Office, between the years 1996 and 2007, the country has reduced its total net waste amount by more than 37.7 million U.S. tons.

Even before Germany’s Closed Substance Cycle and Waste Management Act formed the country’s national waste management policy, legislators knew they needed to make big changes. Something had to be done to reduce the amount of solid waste the country was generating each year.

In 1991, Germany adopted its Packaging Ordinance, which requires all manufacturers to collect and then recycle or reuse their packaging after it is disposed of by consumers.

Making corporations responsible for their packaging to the end of its life cycle encourages them to package goods with fewer materials in order to minimize recycling and disposal costs.

The Ordinance focuses on improving three categories of packaging:

The Dual System and The Green Dot Trademark

Many companies had a difficult time complying with all the new standards and recycling laws introduced by the Packaging Ordinance.

They decided that they needed to better organize themselves, and so the non-profit organization Duales System Deutschland GmbH (Dual System Germany, or DSD) was created.

Manufacturers pay a fee to become a member of the DSD and are then permitted to print Der Grüne Punkt (the Green Dot) trademark on all their packaging.

Fees are decided based on the material, the weight and the number of items. The DSD also takes into consideration what it will cost to collect, sort, treat and recycle the different materials.

Recycling companies guarantee to accept any and all materials displaying the Green Dot, because the trademark is a symbol that the product’s manufacturer has paid to become a DSD member and promises to comply with Germany’s recycling laws.

Currently, the Green Dot system is used by more than 130,000 companies in 25 European countries (20 EU members and four candidate countries – Turkey, Bulgaria, Romania and Croatia, as well as Norway). PRO Europe, the umbrella organization for European packaging waste management systems, reports that 3.2 million tons (U.S. tons) of Germany’s commercial packaging waste was recovered in 2007. That’s more than 88 percent of all the packaging produced in Germany that year!

But wait, there’s more. DSD reports that the country’s recycling efforts in 2008 not only kept waste out of landfills, but it also avoided an estimated 1.4 million tons of CO2 emissions.

According to a municipal solid waste report by the EPA, in 2007, the U.S. was able to recover only about 43 percent of all the containers and packaging produced that year.

DSD has made recycling widely available and very convenient for German citizens. Trash bins can be found on street corners, in public parks and other spaces, in the courtyards of apartment buildings, and in all single family homes. These trash containers are usually color-coded and labeled according to what should be placed in them: 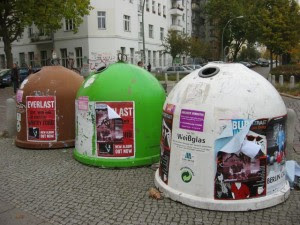 Germany distributes bins of different colors for every material. While Germans have to separate their recycling, the system is still very successful. Photo: Makingthishome.com

A neighborhood will also likely have receptacles for collecting discarded shoes, clothing items and scrap metal. There are also black bins for any rubbish that doesn’t fit into one of the other categories.

Legally, Germans are not obliged to sort their household waste, but clearly the vast majority of them don’t mind doing it. In fact, many citizens feel so strongly about sorting their trash that they will often help or politely correct foreigners or any others they see who are “doing it wrong.”

“[Recycling] becomes a way of life here, and if people in the [United States] just started doing it, after a while it becomes routine and you don’t even realize you’re doing it,” says Kormany Hochnedel, a 23-year-old American living in Germany. “It’s the same as simply throwing something away. It’s such a simple thing that makes such a huge difference.”

“Special rubbish,” paint and other chemicals, can be taken to local recycling centers. Or sometimes, stores that sell those products will have trash bins outside their doors. For example, an electronics store will have a bin for discarded batteries.

Germans know that when they shop at grocers and many other stores, they are expected to bring their own reusable shopping bag. Some stores do have plastic bags, but they must be purchased by the consumer.

“Nobody even considers using plastic bags when going to the store [in Germany],” says Hochnedel. “You bring your own, or you carry your stuff out in a cart or in your arms. You really see what a difference little things like that can make – there is never garbage on the streets. It’s so clean.”

Also, people can return certain bottles and other containers to the grocery or liquor store where they were purchased. For doing this, customers receive either a discount off their next purchase, or they get back a small deposit, usually around 15 cents per bottle. This provides citizens with a small monetary incentive to recycle, and it also helps companies meet their recycling quotas.

“It doesn’t matter whether [the bottles] are made from plastic or from glass – a person has to pay a deposit, so at the end he’s going to give the bottles back,” Aksoy says. 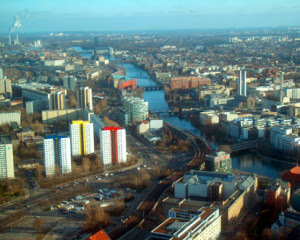 Germany is working on becoming a zero-waste country by 2020. Photo: Destination360.com

So, after all the careful sorting, where does the trash go? The DSD has a plan for that part of waste management, too.

The DSD works with cities and towns to coordinate collection sites and systems around the country. Many local governments hire private contractors to handle their waste management, but these operations are still funded by the Green Dot fees paid by industry members.

After the trash is collected, what it is determines which path it takes. Most items will be transferred directly to a sorting plant, where the recyclable parts are separated from the non-recyclable parts. Materials that go to sorting plants include paper and cardboard, packaging, textiles and shoes, bulky waste, hazardous waste, scrap metal, electronics and batteries.

From a sorting plant, material can travel in many different directions. Paper goes to a paper mill, glass goes to a processing plant and then to a glassworks facility, and clothing goes to second-hand distributors. The majority of items materials will go to either a recycling facility, treatment facility, or both.

Anything that can’t be recycled is responsibly incinerated or undergoes mechanical-biological treatment before being put into a landfill. In the 1970s, Germany had around 50,000 landfills, but now there are fewer than 200, thanks to stricter regulations and a diminished need.

According to the European Environment Agency, in 2006, Germany landfilled only about one percent of the country’s untreated waste. In 2007, the EPA reports that the U.S. sent 54 percent of its waste to more than 1,700 landfills.

Germany certainly has no plans to fall out of the No. 1 position in the recycling race. With its recycling rate already around 70 percent, the nation is ready to conquer the final frontier in sustainability.

By the year 2020, Germany hopes to find a way to reuse every last scrap of every item produced. Achieving this zero waste goal would make the country 100 percent sustainable and eliminate the need for landfills completely.

It’s no question that Germany has some serious work to do in order to meet its goal, but with the excellent ability to organize its industry members and citizens, as well as engineer highly innovative and efficient manufacturing and recycling processes, the nation continues to prove itself as one of the most forward-thinking and environmentally conscious countries in the world.

Marie Look is a writer and editor based in Phoenix. She enjoys spending time outdoors and learning ways in which she can practice more environmentally-friendly living.